The most complete geographical representation ever created of Mi’kma’ki territory and Mi’kmaw Place Names, including an online interactive map with more than 700 place names derived from approximately 1500 names collected throughout Nova Scotia from interviews with Mi’kmaw Elders and others. Click here to browse the Atlas of Mi’kmaw Place Names …

Join us virtually this year for Canada’s National Geospatial Leadership: GeoIgnite conference on July 22nd to 24th, 2020!
GeoIgnite is a unique opportunity for geospatial community in Canada and abroad to learn, share and engage with one another at our virtual conference.

Canada has a vast network of pipelines that transport millions of litres of oil and gas every day. With this interactive mapping application, Canadians can easily identify where pipelines are located and find important related safety information.

The Nova Scotia Civic Viewer is the online mapping application used to view civic map information, with a free public viewer version and another version containing more information for certain parties that need more detailed information and the ability to update the information of the database.

What3words … because words are much easier to remember

What3Words is a relatively new geocoding system that is actively being used around the world to help make it easier to describe the spatial location of an area. According to the United Nations about 75 percent of the world (almost 4 billion people) has not been properly addressed, making it hard to locate where people live, something that we take for granted here in Canada. 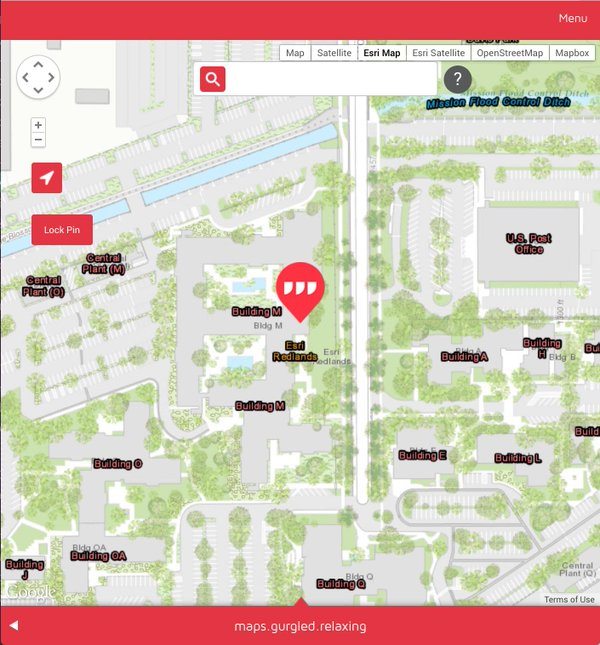 This geocoding system differs from other alphanumeric location systems and GPS navigation by encoding geographic coordinates into 3 common dictionary words instead of long strings of numbers (for example, the center of Parliament Hill is situated at scales.balance.bonds). The three words have no combined contextual meaning but are simply three words derived from a database used to describe a specific location. Unlike most traditional mobile mapping applications that rely on postal addresses, this one makes use of a grid containing 57 trillion squares, each 3 m x 3 m with a unique 3 word identifier and covering the entire planet.

What3Words provides an online mapping application and mobile web apps for smart phones (Android os and iOS) that people can use to identify any location on the globe using distinctive three word combos. Considering at least 5 billion people on earth do not have a proper home address, What3Words could be considered a useful tool for people living way from the modern grid. 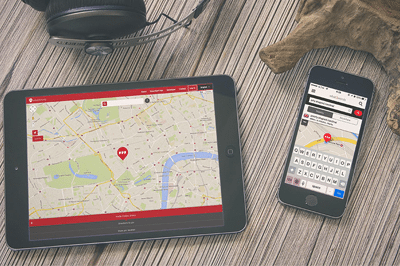 What3Words also provides API code to web developers so that they help the geospatial community by developing handy third party applications. By default the What3Words website runs off of Google maps, however now Esri has made the service available in ArcGIS Online and for ArcGIS for Desktop, so you can use the application with other base maps and even your own data. To configure the What3Words Locator for ArcGIS see the instructions provided here.

To determine what your 3 word address is, or determine where you are Located using the What3Words geocoding system simply: 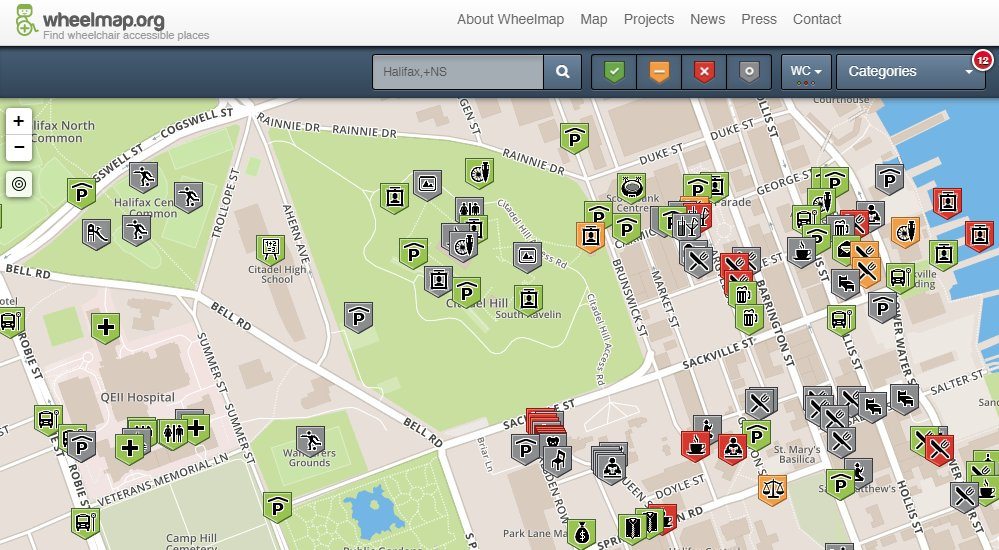 Wheelmap is an online mapping application by a German non-profit association, to help promote wheelchair accessible places (currently more than 550,000 points of interests in eighteen different languages have been added) and allow people to find out if a location is accessible or not. Wheelchair Accessible Maps help provide answers to questions such as:

Can some one in a wheel chair reach a specific restaurant? Does a popular pub have an accessible washroom?

It is a crowd source driven application so anyone can contribute to the project by tagging public places according to their wheelchair accessibility, and add new locations if they know of ones that have not been added yet. The OpenStreetMap based site provides online tools to help people plan their trips more efficiently. Users can use the mapping application to learn about accessible places and share relevant location based information with others. Users can also download wither the Wheelmap iPhone or Wheelmap Android app to use  with their smart phones to help them while out and about.

The quality of information on the online mapping application varies from place to place and seems to be more popular in European countries but has been gaining use here in Canada.

It is also hoped that with public awareness raised through the use of Wheelmap, that more owners of public buildings will be encouraged to improve their location’s accessibility.

Connect with The International Space Station and People From all Around The World!

Last year Dave MacLean (@DaveAtCOGS), a GIS instructor from the Centre of Geographic Sciences (COGS) in Nova Scotia combined Chris Hadfield’s (@Cmdr_Hadfield) amazing collection of aerial photos that he captured while commanding the International Space Station into an interactive online map. The Interactive Tweet Map quickly grew traction and popularity all over the world and allows users the ability to locate the places in each photo while interacting with Hadfield and the other astronauts as they rotated the earth around 18 times a day.

Now a  new joint project between NASA, COGS, and Esri was recently kicked off by Reid Wiseman (@Astro_Reid), one of the astronauts currently living on the space station by tweeting from the Space Station. The new map (http://bit.ly/SpotTheStation2) is sort of an inverse idea to the original one, as this one is maps the many locations around the world where people have spotted the International Space Station. The community driven project is open to all and anyone can contribute.

Come outside and try to #spotthestation during #Exp40. Put your location in {brackets} so we can map it!

How can you contribute?

Your Tweet will then automatically appear on the map at your location containing your tweet with your info & photo For more info, contact Dave MacLean (@DaveAtCOGS)

Where were you when you saw the Space Station? Tweet #SpotTheStation & add your location http://t.co/37nX9vnZ4j pic.twitter.com/YDD29LrUtO — Cdn. GIS & Geomatics (@CanadianGIS) June 12, 2014

Cheers @Astro_Reid! We took a picture of you too! Can you see us? :) #SpotTheStation pic.twitter.com/XmdeWDSiYM — Carlsberg (@carlsberg) June 4, 2014

What to know when to look up to see the #ISS fly over you? Get alerts to #SpotTheStation at http://t.co/I8fjb4dMXI pic.twitter.com/QBQayYQCJX — NASA (@NASA) June 4, 2014

Where were you when you saw the Space Station? Tweet #SpotTheStation & add your location then go to http://bit.ly/SpotTheStation2