One of the things that I have been fortunate enough to avoid since moving east back to the Maritimes a few years ago has been the annoying daily commute that so much of us participate in at least twice a day (although I have had my share of it over the years, having lived in many urban areas such as Halifax, Ottawa and Toronto). Statistics Canada reports that the average time that Canadians spend commuting to and from work increased from an average of 54 minutes in 1992 to an average of 63 minutes in 2005. If you tally those minutes up you may be shocked to learn that it works out to almost 32 days a year that an average person spends in traffic commuting. 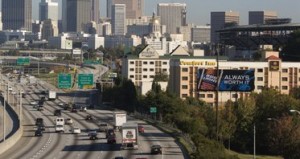 “For one in four Canadians, the two-way commute takes more than 90 minutes.And it’s not just the commute. There is nearly as much traffic at lunchtime today as there was at rush hour a generation ago. Not only are there more cars and trucks on the road but we’re using them for more things: driving the kids to sports, where once they would have walked.” (Andrew Coyne – Macleans Magazine – Jan 2011).

So are you tired of the traffic and want to travel faster and smarter?

Then perhaps you should check to see if your city is available on ReRouteMe.

This online mapping application takes the basic functionality of Google maps (such as the display of the reference map and the address search ability) and combines it with custom functionality and databases that are completely independent from Google to provide a powerful value added product that can help you avoid accidents, traffic cams, construction and any congestion on your everyday commute. The ReRouteMe back-end, powered by Open Source software packages has been further customized to meet the application requirements and public demand. ReRouteMe uses PostgreSQL as the RDBMS for the geographic/tabular data management as well as processing and the routing engine is based on a modified version of pgRouting.

Designed with a Wide Range of Users in Mind

ReRouteMe has been designed for a wide range of users including those that drive their own vehicle, use public transit, take a taxi, cycle and even walking. Currently it provides over 35 different cities (mostly from Ontario), a growing collection that continues to increase since the first time I discovered the application in 2012. It provides users with the basics such as simply going from start to final destination as well as the ability to customize with multiple stops, stop-over times and the ability to set other various dynamic criteria to help influence the provided route. Users can sign up for an account, define and store their routes, and then the application will notify them via e-mail with alternative options when there are last minute events such as accidents, traffic jams or road closures. 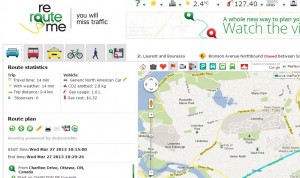 The web site contains plenty of helpful extras that makes it stand out and appealing to a large audience, however I was fortunate enough to get some additional information from Pierre Lermusieaux, the COO of Rhexia Incorporated (creators of ReRouteMe) to share with the CanadianGIS.com audience.

“The ReRouteMe web application was built out of an interest to provide more in-depth and local information about commuting that what is typically available from Google and others. Our focus is the promotion of ‘green’ modes of transportation as well as the presentation of useful information related to public transportation. The ReRouteMe application is free to use by anyone.

The application has been designed to leverage publicly available data that is typically further processed to make it useable and informative. The road network used for the routing is based on OpenStreetMap, the National Road Network (NRN) from NRCan, and the Ontario Road Network (ORN) from LIO. Additional efforts have been invested to add missing information or correct existing one. All of the point of interest have been harvested from public information provided by cities or other organizations.” – (Pierre Lermusieaux – Rhexia Incorporated)

Some of the functionality currently presented in the ReRouteMe application include: 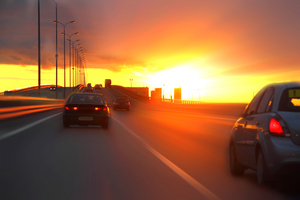 I am sure that by now you can see the from this extensive list of current functionality that the ReRouteMe web mapping application can provide people with robust tools to help them plan their daily commute and learn of any changes that they should anticipate before they head out. So if you have a rather complicated daily commute then I am sure that you can see that a few minutes on ReRouteMe.com before you head out can actually save you time later on.

The team at ReRouteMe that I have been in contact with are very proud of their application and  tell me that they will expand the tool whenever there comes a need or demand for certain services and thus would love any feedback or suggestions for future modifications.

Below are a few more helpful videos on ReRouteMe that show how robust and powerful the tool is; and yet how user friendly and easy to use it is. I recommend that you check it out for yourself (especially if you live in an urban are of Ontario) and let me know what you think, all feedback is welcome. The web site is ReRouteMe.com
as well as being very easy to use with plenty of helpful information including help videos.