Online web mapping for most people is still a relatively new concept; however it has actually been around now for many years now, long enough that a good majority of us now take it for granted. And like many other great products from our modern society there are always various versions or brands that tend to shine and become more popular than the others.

They have evolved so much over the past few years that I am sure you have noticed that even more people have them with them everywhere they go via, GPS navigation units, net books, tablets, smart phones and other portable devices. And hopefully you have already discovered the web mapping section on CanadianGIS.com about the many great Canadian online web maps that are out (and grows every month) to help make our lives easier. 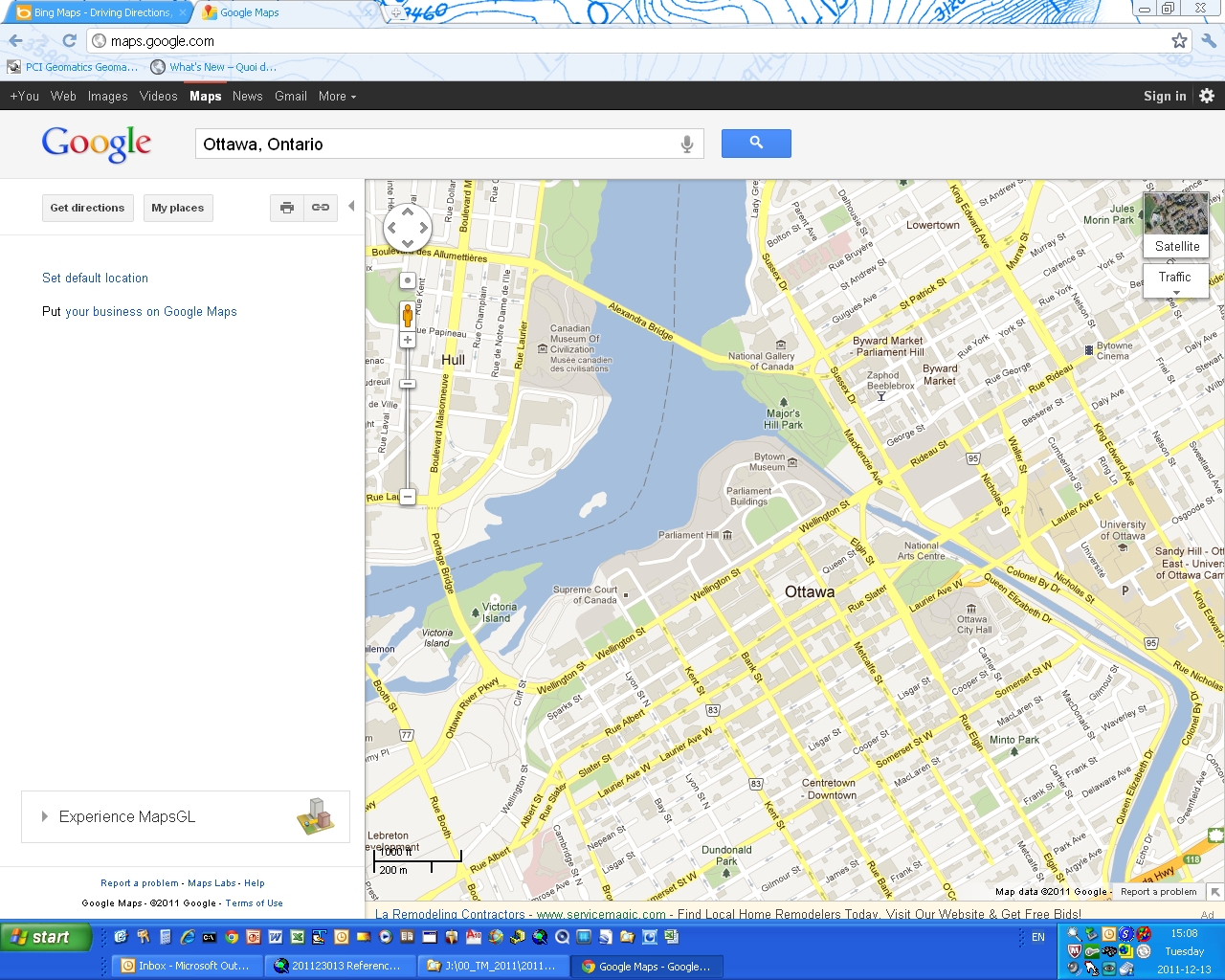 I remember when I first started out in GIS, how it was always challenging to explain to people what I did for a living (and that I did not actually just make the road maps they bought at the gas station).

Now days it has been much easier to explain to people what GIS is thanks to the rather recent increased knowledge about GIS and Geomatics due to more people using the basic free online mapping services like Google or Bing Maps.

Therefore I thought it was time to look at perhaps the two most common free mapping services that most of use all the time to see, how they compare to one another and how they have evolved over the past few years.

So I will start off with Google Maps since I am sure most of us have come across a map generated in google or a website using Google before.

Google Maps is a web mapping service that powers many online map-based services, such as the main Google Maps website, Google Ride Finder, Google Transit, and embedded maps on thousands of websites that use Google Maps API.

Google Maps as we know it know started off as a little C++ program designed by two brothers Lars Rasmussen and Jens Rasmussen from the company Where 2 Technologies. Originally it was a stand-alone program that you needed to download and was not a web based product like it is today. In 2004 Google acquired their company and then transformed the mapping software into an interactive web application.

The first version released in 2005, was based on raster tiles organized into quad tree schematic layouts with the data loading done via XML & HTTP requests. Google uses JavaScript to serve the map data into your browser application. Perhaps the big thing that made Google’s product stand out from the others was when they provided code that allowed other users to integrate maps into their own websites (e.g. CanadianGIS.com). 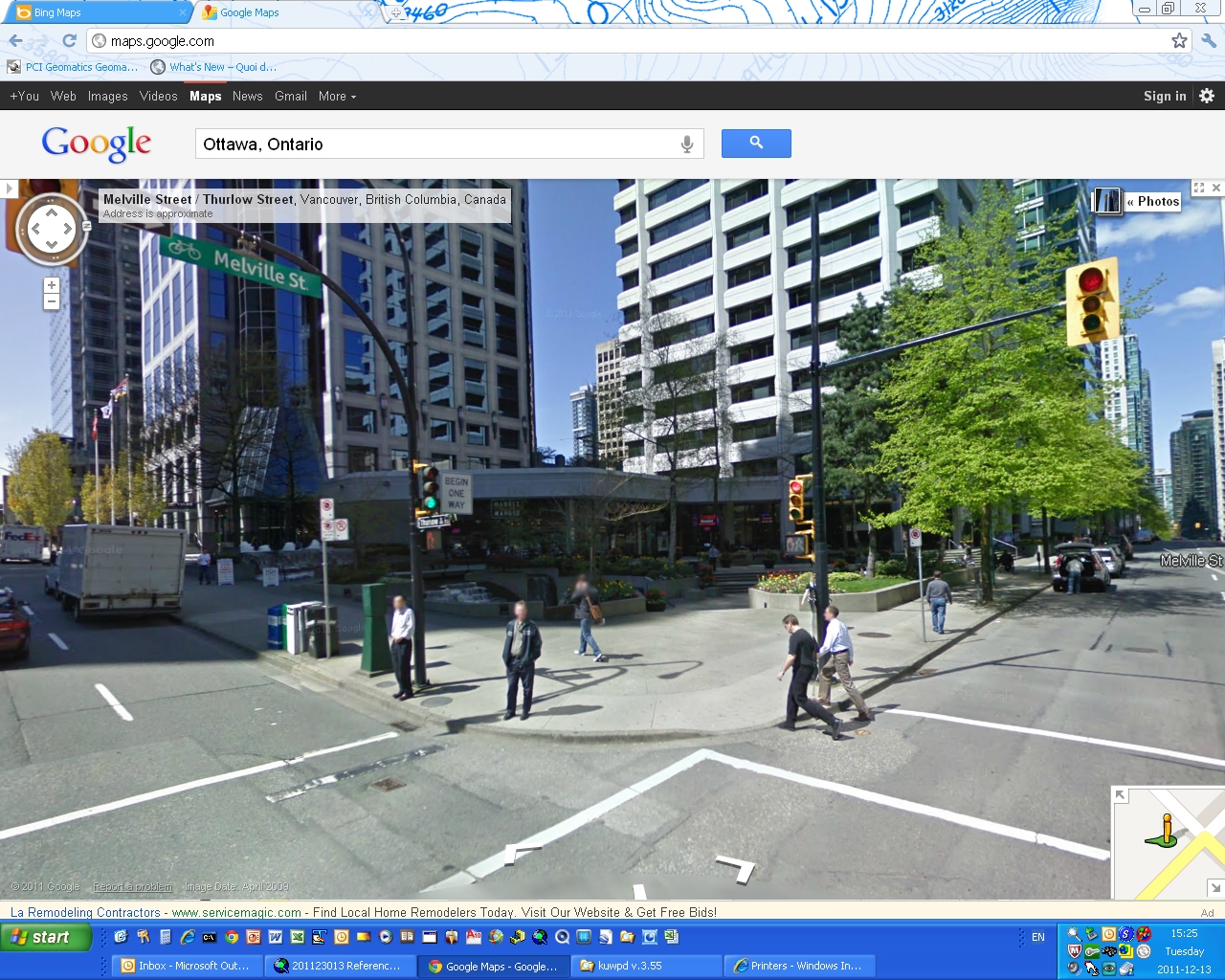 Google Maps offers street maps, and a routine planner that can be configured for the method you are traveling (whether it is by foot, car, bike, or via public transportation). It also has an urban business locator for numerous countries in the world.

In 2007, they added Streetview, which provides users with a 360° captured view of streets in most major towns and cities. Basically a system was designed with multiple cameras that were mounted to the roof of vehicles that could capture data on all sides of the vehicles as the vehicle drove down the street.

Some areas are obviously covered better than others, but the project continues so more areas are covered as time goes on. They also incorporate satellite imagery and aerial photography in many places as well (whenever data sets are available); with the ability to produce quick Hybrid style maps containing map layers, labels and imagery fused together into one mapping product.

The Google Maps application has been pretty rock solid providing others the ability to show case their own mapping data without the need of purchasing high-end GIS mapping software.

Next up will be Microsoft’s Bing Maps. Click Here to continue reading …

What To Learn From Constant Career Change