I recently returned from giving a presentation at Carto2013; an annual Canadian cartographic themed conference that was held at the University of Alberta co-hosted by the Canadian Cartographic Association (CCA) & the Association of Canadian Map Libraries and Archives (ACMLA). It was a relative small conference regards to size but well organized and very informative, covering a wide range of cartographic and GIS topics.

One of the key themes evident at the conference was related to history of cartography and history through maps”, a topic that many of the presentations were related to and several of these talks were about 1826 maps of Northwestern North America created by David Thompson. I myself have never really had much interest in history however these presentations provided me with a much different perspective and maybe I have found myself a new (or old??) to explore.

Yesterday while searching for some Canadian maps with my daughter I stumbled across yet some more historic themed cartography, so I thought perhaps we should start a new section on CanadianGIS.com related to Historic Cartography since it is pretty evident that this is becoming topic of interest to many in the Canadian Geomatics community.

The Royal Canadian Geographical Society (one of the largest non profit organizations in Canada) has added a feature to their Canadian Geographic web site where they are featuring 80 years of Canadian Maps published in Canadian Geographic. One of the Society’s core mandates is to promote the country of Canada by providing a deeper knowledge and broader appreciation of Canada through it’s people, wildlife, geography and heritage as well as the environmental, social and economic challenges that Canadian’s face. 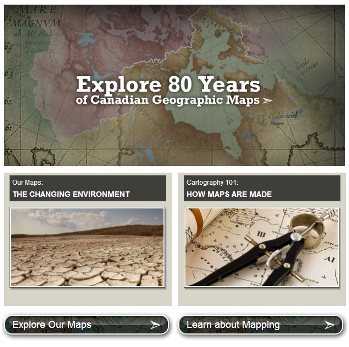 The Canadian Geographic magazine has always done a great job of promoting Canadian people, culture together with geography through informative articles, stunning color images and elegant thematic maps. This online feature will help provide a younger generation of potential cartographic enthusiasts with a great opportunity to discover a legacy of Canadian mapping history together all in one location (and a chance for others to potentially rediscover).

“Through the 80 years that Canadian Geographic has been in publication, cartography has held a prominent place on its pages, offering Canadians a greater understanding of their country and the world. Whether our maps have illustrated a part of the country or a part of our brains, they’ve made a lasting impact. We’ve searched through eight decades of the magazine to bring you nearly 50 maps organized by the following themes: Exploration, Conflict and Borders, People, Wildlife, The Changing Environment and The North.” [source: canadiangeographic.ca]

From detailed hand drawn maps of early explorers (such as Henry Hudson) whom created and documented some of the earliest spatial representations of Canada to digital generated maps that focus on the environment (such as negative effects of urbanization and capitalizing on our natural resources) nature, the north, and our people. With an 80 year span, there is a wide range of cartographic images to browse through as well as a Cartography 101 section that provides some basic explanations of various mapping techniques and technologies used to create maps, including why “There is much more to a map than simply showing you where to go” (for those that do not know so much about maps, the technology and map terminology).

Check out some of the many Canadian Maps published in Canadian Geographic over the past 80 years by browsing through the map collections and various mapping related features available on their website (http://canadiangeographic.ca/vous_etes_ici-you_are_here). 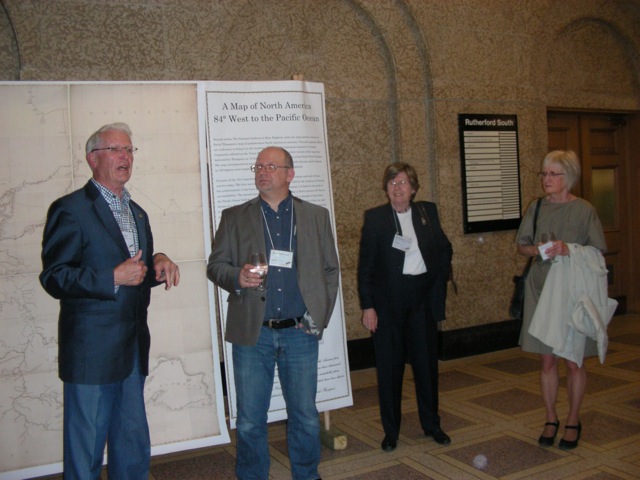 Andreas Korsos, one of the presenters at Carto2013, is a professional Cartographer who has a passion for historic cartography of western exploration and over his career has created numerous thematic maps related to many historic figures such as David Thompson. At Carto2013, he was one of three presenters in a session about reproducing a 200 Year old Manuscript Map of Northwestern North America (Rosemary Malaher & David Malaher also provided very informative talks in that session). They also presented a full size replica of Thompson’s 1826 map of Northwestern North America titled “A Map of North America from 84 Degrees West to the Pacific Ocean”.

The large 6 square meter replica map that was on display, encompassed a geographic region from 45 degrees to 60 degrees north latitude and 84 degrees to 126 degrees west longitude. It was created from 176 high resolution images, mosaicked, georeferenced and is the most pristine version in Canada. It is also the only copy that is available outside the United Kingdom witch until now was only accessible to key Canadian researchers that had to travel to the National Archives in Kew, England.

“I am only one of two that I know of who are performing extensive research on the surviving maps of David Thompson (1770-1857). The 1826 version is the most detailed and immaculate version in existence and it does not deserve to be locked away in an archive in England, hidden from our view or the views of our citizens. “- Andreas Korsos

Those who were not fortunate enough to travel out to Carto2013 in Alberta and have an interest in historic cartography will most definitely want to explore Andreas’ website where you will find lots of information, photos and map replications of a number of early western explorers. As well as becoming familiar with the various maps, he has also researched the literature from the various explorers’ logs and traveled along some of the historic routes to experience the geography first hand. He had many interesting stories about Thompson and his cartographic journeys to share at the various networking opportunities at the conference. 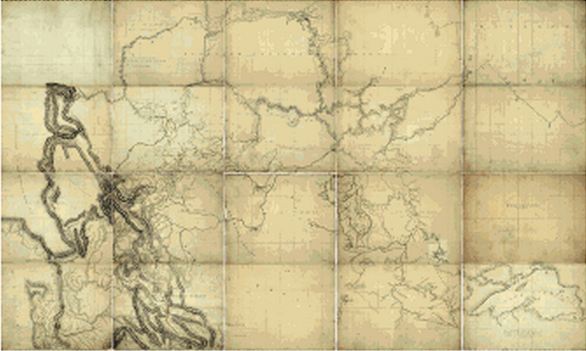 Finally remember to follow or check back to the new “Historic Cartography” section of CanadianGIS.com as we continue to explore other great sources of vintage mapping in Canada and related topics. And if you have a feature related to historic mapping in Canada then certainly let us know if you would like to share it with our online audience.